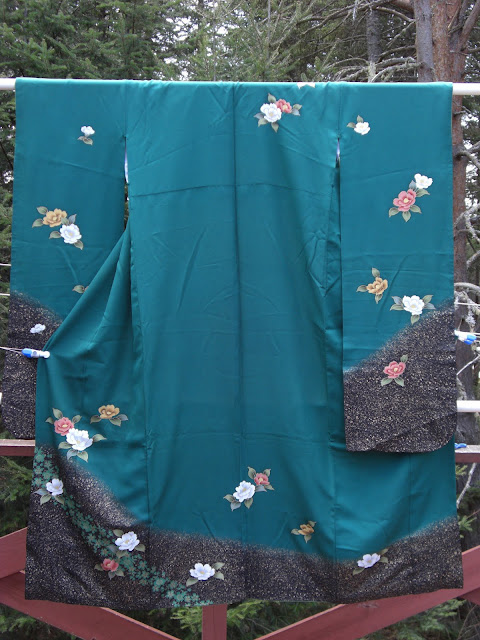 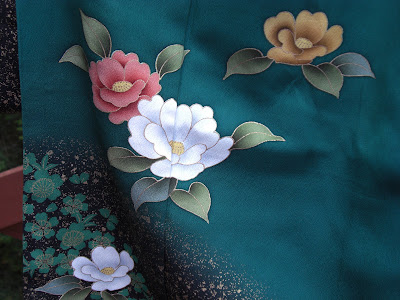 Just a couple of pictures and a story to get this blog rolling. This is a lovely green furisode I bought in Kyoto during my trip there in April 2009. And yes, it has a story!

I have been to Japan a grand total of three times so far. The first trip in the summer of 2007 also saw the beginning of my kimono collection, when I bought my first several pieces (seriously, they covered my bed at home when I laid them out after returning home). I often went to Nagoya on the weekends, and discovered a street near the Uso Kannon shrine filled to bursting with all kinds of second-hand shops, including at least two kimono shops. Before leaving Aichi prefecture for my grand tour through the rest of the country, I made one final trip to Nagoya to visit the kimono shops and see if an item I had previously wanted to buy -- a lovely iro-uchikake (colored wedding kimono) -- but had been short on cash for was still there. The uchikake was still there, but I decided it was too heavy to carry around or ship home and it didn't really interest me all that much anyway*. I wandered into the rest of the shop to see if there was anything else I wanted, and there it was. A gorgeous, deep-green furisode with red, white, and yellow camellias on it. It was perfect, too, not a snag or stain anywhere. But it was $200 or so, the shop didn't take credit cards, and I didn't have the cash for it, so I had to let it go.

Fast-forward to April 2009. My collection had grown substantially in the nearly two years since that visit to Nagoya. I had several other furisode, my iro-uchikake, my awesome houmongi (which you will see later!), more yukata than you can shake a sensu at...but I had never really forgotten about the green camellia furisode, and was still on the hunt for one in that lovely shade of green. I wandered in to the Chicago Harajuku shop on Teramachi-dori and went upstairs to the second level, where they keep the kimono, and began looking around. I found this one with the other furisode near the stairs. It was pretty shocking, really, since it's tough to find kimono that look so much alike. Granted that there are some small differences, but they're similar enough that I felt like it was fate for me to find that green furisode in Kyoto, and bought it immediately.

* This turned out to be a good thing because several months later, I found the iro-uchikake I currently own, and have never once regretted it. In fact, in the four years between buying that uchikake and now, I have only seen one other iro- uchikake I would even remotely consider buying.
Posted by Ayame_hime at 2:32 PM