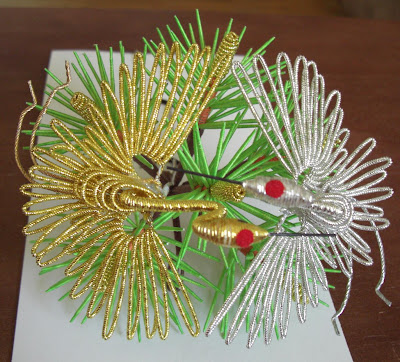 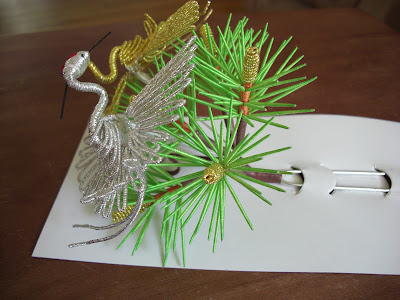 Folks who follow the maiko world got a couple of eyefuls of this kanzashi back in late 2009-early 2010, since this was the kanzashi worn by several of the maiko who debuted as geiko during that time -- including the famous Kikuyu and my personal favorite, Mamechiho.

For folks who don't follow the maiko and geiko world, sakkou is a special hairstyle worn by young maiko in the weeks leading up to their change from maiko to full geiko (geisha). Maiko typically wear kanzashi that vary according to season, with a new kanzashi set each month. But with sakkou they typically wear special kanzashi that aren't in a particularly seasonal design. Many sakkou kanzashi feature one or more cranes.

This particular kanzashi was on sale at Kazurasei when I went to Kyoto with my parents in December 2009. I had seen pictures of Kikuyu and Mamechiho wearing it and really wanted to get a look at one up close, maybe even buy one...and I did! The lady in the shop that day was pretty surprised that I recognized the kanzashi and knew the names of some of the people who had worn that style. Sadly, this particular kanzashi never got worn by a maiko, but it is still one of the style in use that year. I don't suppose anyone knows the name of any other maiko who wore this style?
Posted by Ayame_hime at 1:27 AM