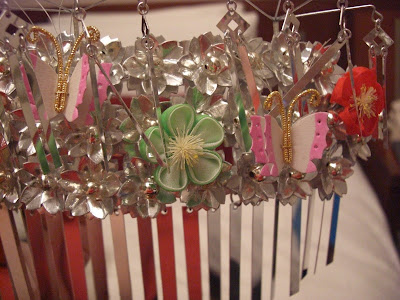 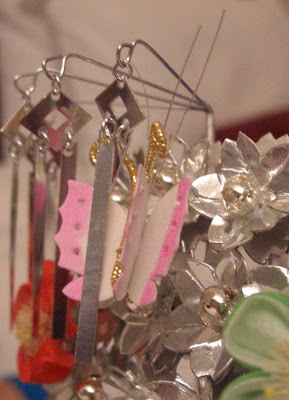 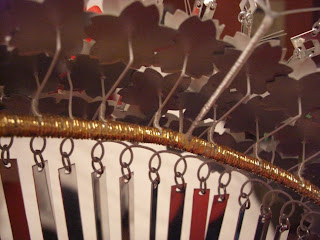 First of all, it is actually still Friday here in balmy Hawaii, so yes this still counts for a Friday photo (barely) :p Second of all, the kanzashi we'll be talking about today is hell to photograph because it is so darned BIG. Just for reference in that top picture, the widest part of my hand (when I attempt to scrunch it up the way it was while holding the kanzashi) is 3-3.5 inches/7.6-8.9cm across. So this thing is enormous. I mean like, gigantic.

I currently only know of one shop that sells these, and I discovered it quite by accident. Back in 2007, when I was first in Japan, I found Ikuokaya, also by accident. At the time I figured they sold nice kanzashi and their maiko stuff looked pretty authentic to me, and the folks there were nice, so I bought myself a nice stash. A few days later a friend of mine from the language program I had been on before going to Kyoto had some time off, so she came out to Kyoto for the weekend. She wanted to get some kanzashi too, so we went shopping at Jyuusanya (where we bought so much that the next time I went back I could see where they had tried to disguise the gaps in their display) and then decided to stop in at Ikuokaya before going on to our main entertainment for the evening: a maiko dinner at a local ryokan. Some inns and hotels have dinner shows where a maiko or geiko will make a brief appearance and perform for the guests, then leave. For many tourists, this is the closest thing to an ozashiki they will ever experience. Anyway, the maiko dancing that night was Miyoharu, and when it was our turn to have a little chat with her she noticed our Ikuokaya bags and mentioned that she knew the place because she shopped there. Well, that's about the best endorsement you can get for a shop. The next night I stopped in for a third time and wound up in a conversation with the owner's son. Now, if you ever go to Ikuokaya you will notice that they have several pictures of various maiko and geiko displayed around the shop. These are in fact pictures of customers. I noticed one picture of a tayuu amongst the maiko and geiko pictures, and asked the owner's son if she came there too. Oh yes, he told me, she comes here too. So I decided to be bold and asked if they had a tayuu kanzashi in stock, and if I could look at it. It turned out that they did indeed have one in stock, and I did indeed get to look at it. Though I definitely couldn't buy it at that time (and later developments tell me they wouldn't have been able to sell it to me anyway if I had asked), I decided that someday I would own one of those too.

Fast forward a little over two years, to the end of 2009-beginning of 2010. I had been living in Japan for several months at that point and had managed two more trips to Kyoto, one a vacation in April of 2009 before moving there to work and the other a short weekend away during Silver Week that September. I always stopped in to Ikuokaya to chat and pick up new pieces. During that winter trip I decided the time was ripe to treat myself to a tayuu kanzashi. So I stopped by to ask about getting one...and found that none were in stock! Turns out that they're a special-order item. Which, when you consider that there are only like four tayuu left in the entire country, it kind of makes sense. So I waited a few more months, thought about it some more, then contacted the folks at Ikuokaya to ask about having one made. Now, these folks are sweet and treat their customers amazingly, and by now they were pretty used to my craziness when it comes to kanzashi, but even they were thrown for a loop by this request. But they rose to the challenge, and by the time I returned to Kyoto for the last time in late July, my kanzashi had arrived and I was able to pick it up. The piece wound up traveling up to Aomori with me before I got the chance to carefully pack it up and ship it home, where it was waiting for me when I arrived.

For the curious, I actually can't tell what it's made of. It looks like metal but is surprisingly light-weight. The butterflies are made of some sort of fabric card and have little antennae.

So, the moral of the story is: If you need something kanzashi-related ask the folks at Ikuokaya, because they can probably get it for you, even if it's a tayuu kanzashi. Also, if you're willing to spend the money you can get ALMOST anything you want in Kyoto*.