So You Want to Be a Geisha for Halloween (Part 2)

(If you missed Part 1 and want to read it first, scroll down the page or click the link.)

In Part 1 of this mini-series, we discussed...well, actually, it was mostly me having a polite rant about what passes for maiko and geisha costumes these days and why I personally find them offensive. But today, we'll get down to the stuff all of you happy costumers really care about: figuring out how to put together your geisha or maiko costume. We will cover two specific steps today: Figuring out what you really want to be for Halloween, and what goes into making a maiko or geisha costume.

1) Figure out what you really want to be for Halloween
Clearly you want to dress up as something to do with the Flower and Willow World. But here’s the thing: for lots of people, when they talk about geisha, the image they actually have in their head is of a maiko. Take a look at these pictures: 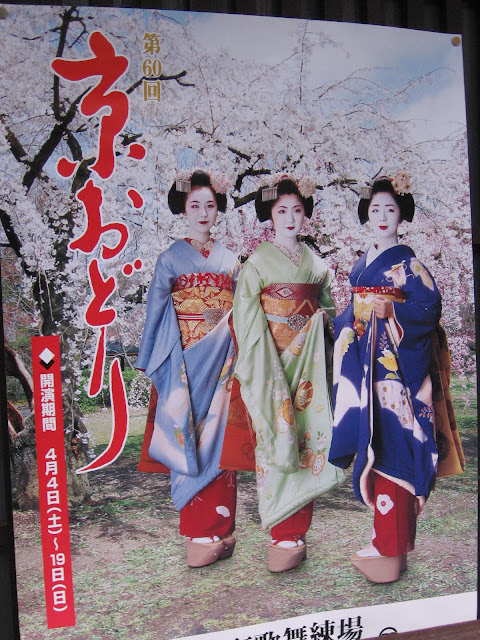 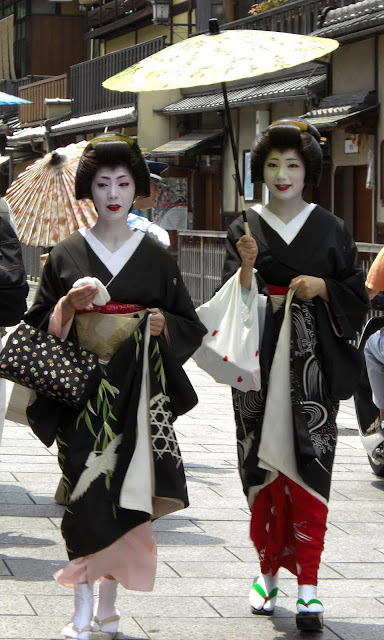 2) Learn the parts of an authentic maiko or geisha costume
While the basic elements of maiko and geisha costumes are the same (i.e. you need a kimono, juban, and obi for both), the details are different.

For a maiko, you would need:
- a hikizuri with furisode-style sleeves (ideally with tucks in the sleeves and the shoulders)
- a two-piece juban with furisode sleeves and a white pattern on a red background
- a heavily-embroidered collar (more red  = more junior, more white = more senior
- a darari obi
- a red obi age with a silver pattern
- a wide and colorful obi jime
- a very large obi dome for that obi jime
- a pair of white tabi
- one pair of okobo (red straps are the default but more senior maiko sometimes wear other colors). You may also be able to substitute zori for the okobo.
- the red thing that I can’t remember the name of that wraps around the torso under the obi. The name will come to me someday, I know. (ETA: I have been informed by yieldforkimono that this is a momi!)

A maiko also has a head full of various kinds of kanzashi. The specifics change depending on her hair style, but always include a silver ougi kanzashi (the fan-shaped one over the right eye) and some sort of seasonal tsumami kanzashi. The only exception to this is during Hassaku or during the misedashi in at least some districts, where maiko may be able to wear carved tortoise shell kanzashi instead of or in addition to tsumami kanzashi.

Maiko costumes are typically very colorful and youthful and may involve busy patterns. Red is a particularly good color for very young maiko. Bright shades of blue also seem to be popular for maiko of all ages. A maiko costume may also involve bold color matches, such as a blue kimono with an orange obi. When you are putting your costume together, you want to pay attention and make sure you don’t cross the border between flashy and gaudy. A true maiko may be very flashy, colorful, and eye-catching, but is rarely tacky or gaudy.

For a geisha, you would need:
- a hikizuri or susohiki with shorter sleeves (and no tucks)
- a matching juban (red and white is still typical but many geisha also wear pink juban)
- an obi that can be tied in the otaiko musubi
- an obi age (can be red but I have also seen other colors)
- an obi jime
- white tabi
- a pair of zori. You may be able to substitute certain styles of geta.
- Geisha also wear the red cloth that wraps around the torso under the obi. (AKA the momi.)

However, they don’t wear nearly as many hair accessories, often only wearing a nice comb on less-formal occasions. Unlike maiko, who style their own hair, geisha typically wear wigs. Black can be a popular color for geisha kimono, particularly for very formal occasions, but don’t feel like you can only pick a black kimono for your costume. Geisha can and do wear colored kimono, but the colors and designs are typically more subdued that those of maiko.

Both maiko and geiko may carry a basket with accessories, and may use things like fans (usually maiogi but uchiwa are often used in the summer) when dancing. You don’t have to have these things, but they can add a nice touch to your outfit, and fans can be particularly useful for a little costumed flirting. After all, just because geisha aren’t prostitutes doesn’t mean they’re celibate nuns either. Both maiko and geisha also wear makeup called oshiroi or shiro-nuri that consists of a white base, red and black eye liner, black mascara, and red lip color. There is also often a bit of pink added around the eyes, especially in the look of younger maiko, but it is barely noticeable. The white base is spread down onto the neck, chest, and a portion of the upper back, and two or three prongs of skin are left unpainted at the back of the neck -- even on geisha, though you often can’t see it because the way their wigs are styled hides it.
Posted by Ayame_hime at 12:10 AM